Rodney Atkins performing at Island Hopper Songwriter Fest's closing show poolside at Pink Shell Beach Resort & Marina Known informally as “the Mayor of Downtown Fort Myers,” Lisa Sbuttoni, the executive director of the River District Alliance nonprofit that promotes the historic downtown of the Southwest Florida tourist destination in between Sarasota and Naples, had plenty to show an out-of-town visitor she’d just met on First Street last Friday (Sept. 27). The visitor was i
420

Nellie McKay in A Play is a Poem (Photo by Craig Schwartz) The playwright told her to “stick to the standards,” and singer-songwriter/actress Nellie McKay did in fact include “In My Solitude” and “The Sunny Side of the Street” in her song selections as the singer in playwright Ethan Coen’s new A Play is a Poem, which is running through October 13 at The Mark Taper Forum in Los Angeles. But Coen was joking, of course. As much a fan of McKay as she is of him, Coen, along with
630 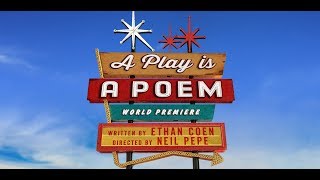 “It’s a different medium,” says Ethan Coen, stating the obvious—but not so much. He’s speaking of A Play is a Poem, his collection of five short one-act plays now running together at The Mark Taper Forum in Los Angeles. Coen, of course, is with brother Joel, the Academy Award-winning director/producer/screenwriter of such landmark movies as No Country for Old Men, Fargo and The Big Lebowski. But Ethan Coen has also written books of poetry and other plays, including three othe
170
1
2
subscribe