Steve Riley, right, with Kevin Wimmer, at Fete de Marquette in Madison, Wisconsin, on July 14. For Cajun music authority Todd Ortego, accordionist Steve Riley, with his band the Mamou Playboys, is “the band that introduced many new Cajun fans to the music of our culture--both in South Louisiana and especially out of Louisiana.” Indeed, Steve Riley and the Mamou Playboys have completed countless tours and released 15 albums since their self-titled 1990 debut album for Rounder
610 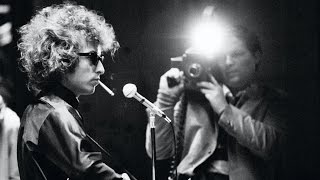 D.A. Pennebaker discusses his historic Bob Dylan documentary "Don't Look Back" D.A. Pennebaker, the documentary filmmaker who in the 1960s helped pioneer a movement known as cinema verité or direct cinema, died last Thursday at 94. His use of lightweight equipment including hand-held cameras and allowing for live sound recording was notably employed in two of the most historically significant rock documentaries: Don’t Look Back (1967), which followed Bob Dylan on his 1965 tou
140
123
4