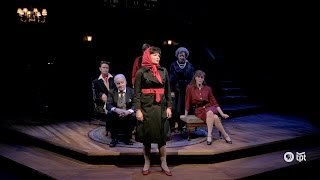 'Glensheen' Chan Poling is best known nationally as keyboardist/vocalist for legendary Minneapolis rock band The Suburbs, as well as the same role in The New Standards. Locally, though, he’s equally renowned for his musical theater work, and on Friday the original cast album of his most successful theatrical project, Glensheen, is being released. Called “a murder-mystery-musical,” Glensheen was written by playwright/screenwriter Jeffrey Hatcher (his credits include a theater
760

From left: Misty Rowe, Buck Trent, Jana Jae and Lulu Roman Celebrated old acts and exciting new ones make up the annual Association of Performing Arts Professionals (APAP) showcase roster, and one act at last week’s gathering qualified as both. That was the one made up of legendary Hee Haw cast members Misty Rowe, Lulu Roman, Jana Jae and Buck Trent, who as the Kornfield Friends showcased at Funky Joe’s—a short walk from the New York Hilton Midtown APAP home base, where they
1670

Terrance Simien to the rescue at Ken Waldman's APAP showcase